The U.S. National Championship is a new program solely dedicated to showcasing and highlighting the best CS:GO players in the nation, exclusively profiling the climb and struggle of graduating from (G)reat to (S)uper.

Premiering in early December with season one, ESL in partnership with ESEA will bring you coverage like never before of the Rank G competitive ladder. At the end of the season, two players will officially be elevated to Rank S status.

The program will be divided between two weekly shows: Basecamp and The Ascent. Basecamp will run weekly on Mondays, hosted and casted by Mark “boq” Wilson, showcasing live matches and gameplay of the best Rank G games of the week. The Ascent will be broadcast on Fridays, and will bring you only the week's best plays, biggest leaderboard jumps, most interesting stats, clutch moments, and enticing interviews from the players who are all vying for their share of over $150,000 in global prizes.

What’s In It for Me?

Viewers: Each week ESL & ESEA will be giving away prizes to those who tune in to follow players in their unprecedented journey to the top of the U.S. Counter-Strike scene.

Competitors: If you are a current ESEA Rank G competitor aspiring to get to the next level, this is an exclusive opportunity to gain key exposure and experience while being profiled, highlighted, and showcased every single week on live broadcast to thousands of fans. If you’re not, make sure you sign up for an ESEA Premium account and get started to be featured in future seasons of the program!

Broadcasts will be brought to you weekly via close partnership by ESEA & ESL. Shows kick-off Friday, December 7 immediately after the Mountain Dew Global Challenge Day 1 at approximately 9:30 PM ET. Broadcasts continue weekly until late December, followed by the season one finale in early January where two winners will be celebrated for rising to the top of the U.S. scene.

You can view the full schedule below. 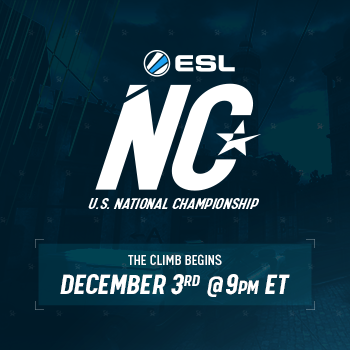 Happy Holidays and Season’s Greetings! Speaking of Seasons, the upcoming ESEA League Season will be the 30th run by ESEA, spanning 10 years of competition. We wanted to take a moment to…

You’ve seen the major changes to the ESEA PUG system and Rank G, but we’re not done yet. We’ve spent the last few months working with players from across the…